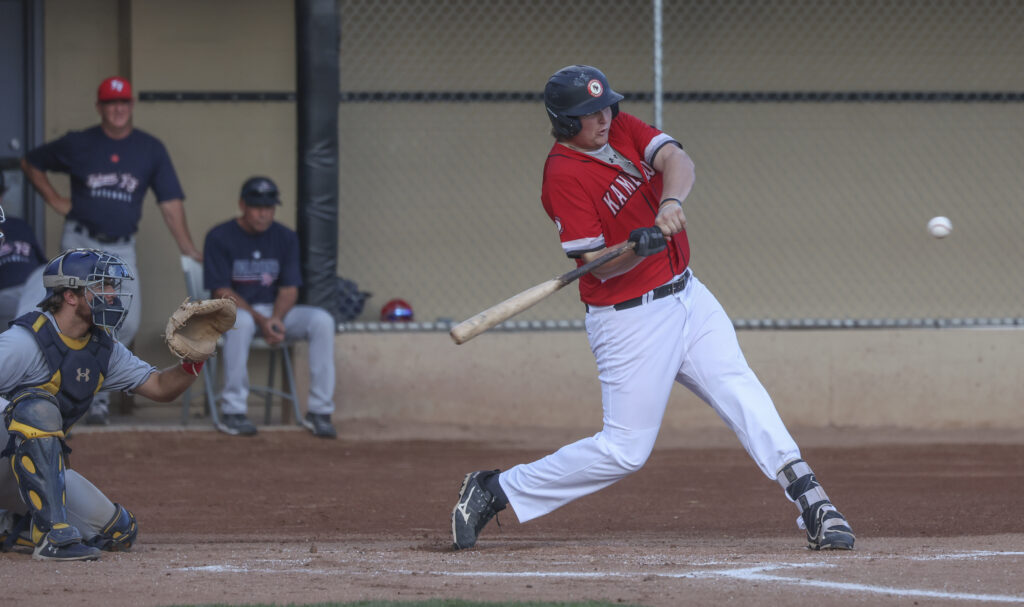 Zack Beatty hits his 10th home run of the season to lift the NorthPaws to a sweep over Kelowna. Photo: Allen Douglas

The Kamloops NorthPaws took advantage of a 4-RBI performance from their 6’7″ slugger to defeat the Kelowna Falcons 5-3 Thursday night to sweep the series and take a step closer to the postseason.

The NorthPaws opened the scoring in the 1st inning. Zack Beatty hit a single with the bases loaded to bring Jackson Forbes home for his team-leading 28th RBI of the season.

The Falcons answered in the 2nd. Kamloopsian Austin Coyle, playing left field for Kelowna, hit a single against his hometown squad to score Charlie Welch and tie the game at 1-1.

Félix Chénier-Rondeau took advantage of a well-timed stolen base attempt to score his team-leading 32nd run of the season on Beatty’s 2nd RBI single of the night to make it 2-1 for the NorthPaws in the 3rd inning.

Heads up base running by @chenier_felix for the go ahead run.

The visitors took their first lead of the game in the top of the 5th inning. Coyle scored on an RBI double by Kam Edwards, then Sam Hasegawa came home in the next at bat when Mike Montrezza grounded out to short to make it a 3-2 ball game.

Noah Or tied the game back up in the bottom of the 6th inning. He drew a lead-off walk and eventually came home on a double steal, swiping home when Falcons catcher Nico Button failed to check 3rd before trying to throw out a stealing Dylan Zavala at 2nd base.

In the next inning, Beatty launched his 10th home run of the season, a two-run shot for his 4th RBIs of the night to give the ‘Paws the lead they would never relinquish.

Ben Polack and Dylan Emmons, who earned the win, each pitched a scoreless inning in relief. Kolby “Wild Thing” Lukinchuk took over in the 8th inning to record the final six outs and earn his 4th save of the season, dropping his ERA to 0.90 on the season.

The victory clinches the inaugural BC Cup title for the NorthPaws – a friendly competition between all four BC-based teams and their respective mayors.

The NorthPaws will head to Bellingham to wrap up the regular season in a road series against the Bells beginning Friday night.