The Kamloops NorthPaws have added Arizonian Ty Siffermann to their inaugural outfield.

Siffermann, a sophomore at Grand Canyon University (GCU) from Chandler, Ariz., was a duel-sport recruit coming out of high school. His athleticism earned him attention not only from baseball recruiters, but also from NCAA football programs as a receiver and defensive back. 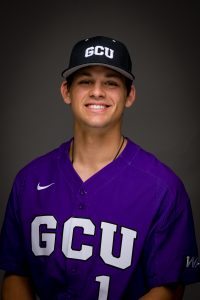 “Playing outfield goes along the lines of receiver, tracking the ball and running it down,” said the newest addition to the NorthPaws 2021 roster. “I look at it as the same idea, as an outfielder tracking fly balls compared to a quarterback throwing me a pass. You have to run a good route to make the catch, it’s just a different sized ball.”

Toward the end of his high school tenure, he began to develop a stronger passion for the diamond than the gridiron. Ultimately, he decided to pursue baseball over football. Listed at 5’10”, he said he sees more long-term potential in baseball due to the lesser physical nature of the game as a smaller athlete.

“Being a smaller guy myself, for the rest of my life I want to play baseball, something where I’m not going to get hit around as much,” Siffermann said. “I was starting to like baseball more, getting more competitive with it, then GCU reached out and the coaching staff really made me want to pursue baseball and develop my skills that way.”

His choice to join the NorthPaws was mainly his prior experience with head coach Cole Armstrong. They worked together last summer in the Arizona Collegiate Wood Bat League, along with NorthPaws catcher Trey Newman.

“Being around him and the team environment he creates, he’s a great guy and even better coach,” Siffermann said of the NorthPaws bench boss. “He’s very helpful with the hitting aspect and being a good players’ coach.”

Two intangibles stand out for Siffermann, according to his coach, his athleticism and his attitude.

“He’s a tremendous athlete. He can absolutely fly and he’s extremely strong,” Armstrong said. “He made plays last summer that, if there was a camera there, it would’ve made the Top 10 on SportsCentre.”

In addition to his strong defensive abilities, Armstrong praised his daily approach. Siffermann, he said, is the type of player to bring a consistent work ethic to the ballpark, unable to tell if he went 0-for-4 or 4-for-4 at the plate based on his demeanour.

“He’s the quiet leader type,” Armstrong said. “People are drawn to him by the way he goes about his work. He’s not a rah-rah type. He just comes to the ballpark every day to bust his butt and teammates are drawn to that.”

Finally, Armstrong point out his potential. It’s only his second year concentrating solely on baseball. Based on his defensive abilities and how much room Siffermann has to grow, Armstrong can see a potential path to pros.

“Just wait until you see this guy go catch a ball in centre field.”