NorthPaws Lose One, Win One in Nanaimo 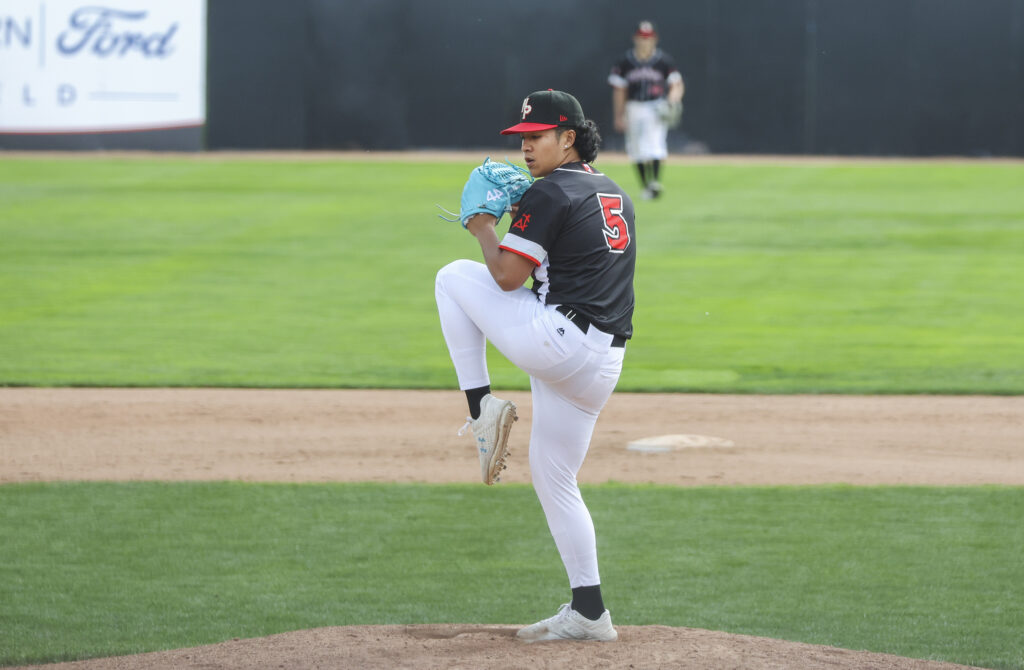 Vic Domingo picked up his second save of the season in an 8-6 win on Tuesday. Photo: Allen Douglas

The Kamloops NorthPaws split a pair of mid-week games in Nanaimo on Monday and Tuesday.

Nanaimo got the better of the visiting Kamloops side in a 2-1 extra innings win for the NightOwls on Monday, but the NorthPaws answered with an 8-6 victory on Tuesday.

Unfortunately, Wednesday’s game ended in the 3rd inning due to a medical emergency in the stands. A new date has not yet been determined.

The BC-based expansion teams got locked in a pitchers duel Monday evening.

Félix Chénier-Rondeau opened the scoring for the NorthPaws wit h solo home run in the second at-bat of the game, his third homer of the season.

The visitors led until the bottom of the 6th inning when Cody Hendriks hit a one-out triple for the NightOwls and was brought home on a Tobey Jackson single in the next at-bat.

The final run came in the bottom of the 10th inning. Isaac Kim hit a one-out double for Nanaimo. He was replaced by pinch runner Logan Gibson, who stole third then stole home to secure the win for the home side.

NorthPaws started Tyson Heaton pitched six strong innings, allowing one run on five hits and striking out four. He has only allowed one run through 12 innings in two starts this season.

The NightOwls starter Josh Laukkanen answered with six innings of one-run baseball as well. Jaydon Thomas and Dylan Joyce came in relief behind Laukkanen and they combined to shut down the NorthPaws offence for nine straight innings. 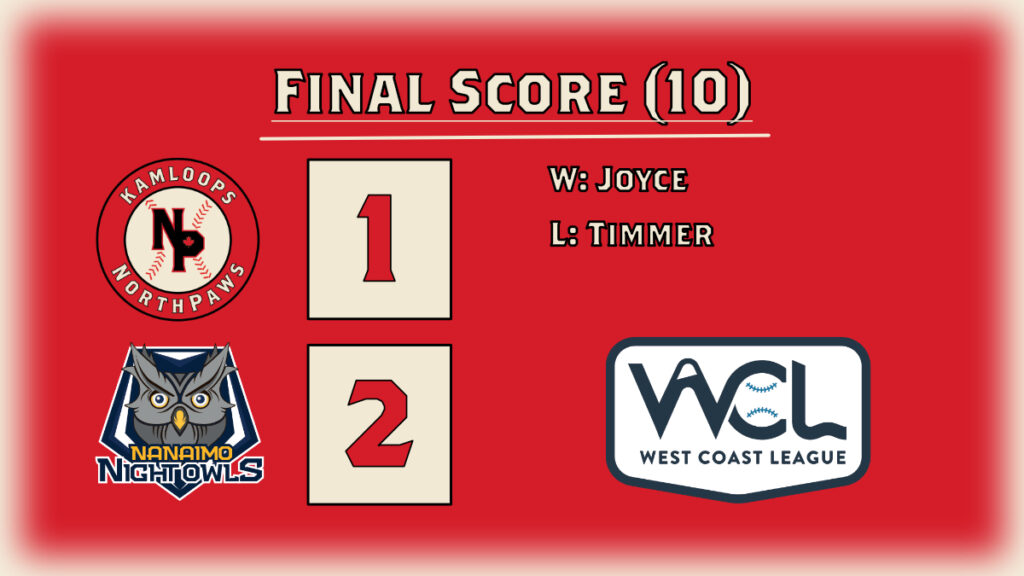 The NorthPaws bats answered in grand fashion on Tuesday.

Once again, Chénier-Rondeau scored the opening run of the game. He hit a single, advanced to second on a single by Noah Or, and was brought around to score on an RBI-single by Zack Beatty.

The NorthPaws padded the lead in the top of the 2nd inning. Nolan Austin drew a lead-off walk, Kade Huff reached base on an error by the third baseman. Huff was put out at second on a fielder’s choice, putting runners on the corners with one out. Green, who reached on the fielder’s choice, stole second before Jackson Forbes drew a walk to load the bases. Chénier-Rondeau cashed Austin and Green with a two-run single to open the scoring in the inning. Or followed up with his second single of the evening to once again load the bases with one out. Ty Penner walked to score Forbes, then Beatty was putout on a fielder’s choice which scored Chénier-Rondeau to extend the lead to 5-0.

The teams exchanged runs in the 4th inning. Penner scored on a solo home run, his first West Coast League bomb, in the top half of the inning. Joshua Marchese answered in the bottom half with an RBI single to get the NightOwls on the board.

Nanaimo cut the lead in the 5th inning. Tim Holyk hit an RBI single, then Cody Hendriks scored on a wild pitch to cut the lead to 6-3.

The NorthPaws added another run in the 6th inning. Forbes hit a one-out single, stole second and came home on a single by Or.

The visitors added another run, their final run of the contest, in the 7th inning. Austin hit a solo home run, another West Coast League first for the NorthPaws in the game.

The NightOwls started the comeback attempt in the bottom half of the inning, scoring three to cut the NorthPaws lead to two runs, but that’s as close as they would get as Vic Domingo came in to retire the final four batters for his second save of the season.

Sean Heppner picked up the win for Kamloops. He allowed one run on four hits and struck out five in the start. Kyle Rosenfeld took the loss for the NightOwls. 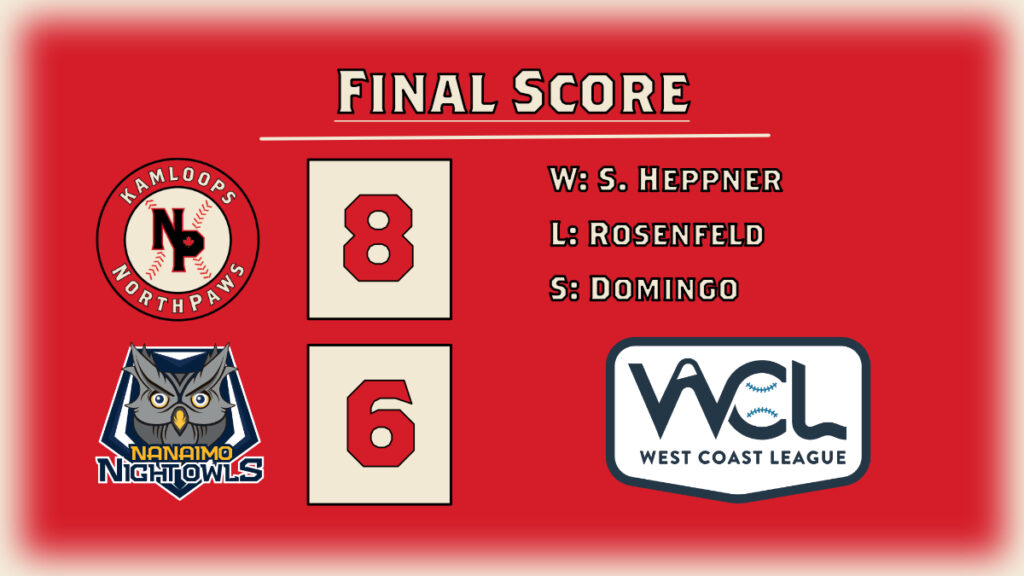 This is the third road series split for the NorthPaws this season. The team is 3-6 on the road but 7-2 at home for a 10-8 record overall, good for second place in the North Division. The NorthPaws sit three games behind the division-leading Bellingham Bells who are riding an eight-game win streak.

The rescheduled road dates are:

Game 3 in Port Angeles (June 5) has been rescheduled to July 18.

Game 3 in Nanaimo (June 22) has been postponed, date TBD.