Ryan Beitel did not sign with the University of British Columbia Thunderbirds expecting to be part of the pitching staff.

No, the NorthPaws’ newest pitcher was primarily a shortstop growing up playing minor baseball in Cloverdale and for the Langley Blaze of the BC Premier Baseball League.

Beitel pitched about 10 times in high school, but one of those outings happened to be against the son of Thunderbirds’ head coach Chris Pritchett.

“I just happened to throw a no-hitter that night. I spent the following fall (with UBC) as a position player and we decided to give pitching a shot. I came back in the spring and the rest is history. Everyone just loves me pitching now,” Beitel said with a chuckle.

Clips from the last inning of Ryan Beitel’s No Hitter pic.twitter.com/Yy6CqEXbmz

Although pitching is a new endeavour for the Thunderbird freshman, he developed a four-pitch repertoire featuring a four-seam and two-seam fastball, a changeup and a curveball.

“I usually like to attack hitters, get up early and put them away with my curveball. That’s my go-to pitch,” he said.

Playing in Kamloops for the summer gives Beitel the opportunity to continue working with Sammie Starr, an assistant coach with both the Thunderbirds and the NorthPaws.

“I really want to aggress my skills and I think playing in the West Coast League and playing for a Canadian team is a really nice opportunity,” Beitel said. “Kamloops is great. I’ve played many tournaments and provincials there growing up, so it’s neat to play a full summer season there.”

Playing for the NorthPaws will be Beitel’s first opportunity at playing in a collegiate summer league. Though pitching is his focus, he has continued to play as an infielder for the Thunderbirds. Last season when their starting third baseman suffered an injury, Beitel stepped in and split his duties between the infield and the mound.

“We realized quickly that he was going to be a pretty darn good pitcher. We had him both as a pitcher and third baseman last year and he played quite well,” Starr said. “I think his future is on the mound and I think he can find much more success there.”

Beitel will come to Norbrock Stadium with a history of winning in the Tournament Capital of Canada. It was the site when his Cloverdale team won the bantam provincial title and he said throughout the years it was a stadium his teams often had success.

“I’ve got a pretty good record going on there, so we’ll have to keep it that way,” Beitel said. 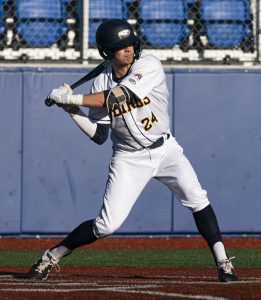