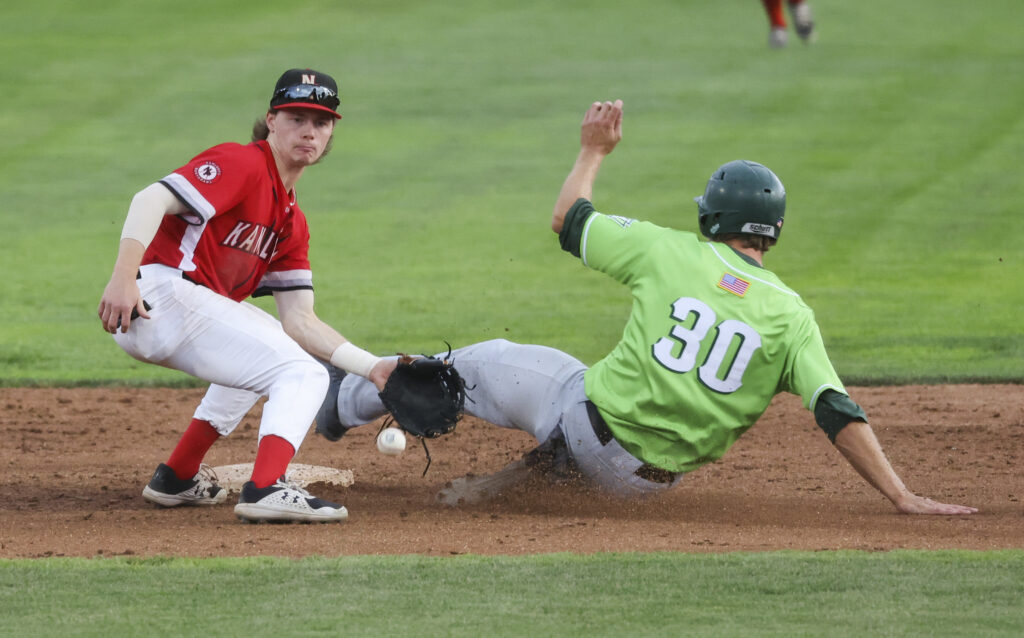 The Yakima Valley Pippins took advantage of a big 4th inning to upend the Kamloops NorthPaws 12-4 on Dearborn Ford Field at Norbrock Stadium Tuesday night to equalize the mid-week series.

Connor Coballes opened the scoring in the 1st inning. He registered the first hit of the game with a single to right field to later come home on a two-out double by Spencer Shipman.

Seth Ryberg added to the Pippins lead in the 3rd inning with an RBI triple.

For the second straight night, the winning team rode an early five-run inning to victory. The Pippins took advantage of some defensive miscues by the NorthPaws as the visitors rolled through their entire lineup to extend their lead to 7-0 through four innings.

Hank Dunn knocked a 1-2 pitch with two out in the 5th inning to further extend the lead.

The Pippins loaded, then cleared the bases in the 7th inning to further extend the lead into double digits.

The NorthPaws put up four runs in the final inning. Robin Villeneuve, who earlier walked, scored on an error by the Pippins third baseman to get the home side on the board. Ty Siffermann then hit a single to centre field to score Tyrese Johnson, who had earlier reached base on a one-out single. Kade Huff hit a two-run double to deep left field to round out the scoring in the game.

Pippins starter Tyler Frieders (3-1) put up a stellar performance for his third win of the season. He held the NorthPaws without a hit into the 5th inning and scoreless through eight on the mound. He only allowed three hits and struck out six on the night.

The rubber match goes Wednesday night, opening pitch is at 6:35pm on Dearborn Ford Field at Norbrock Stadium. AC/DC tribute High Voltage will take to the stage for the Pre-Game Patio Party starting at 5pm.