UBC Righties Re-Commit to NorthPaws for 2022 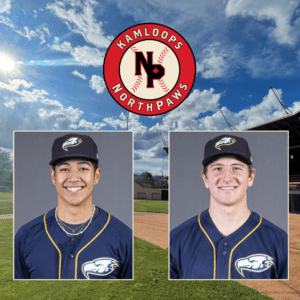 Right-handed pitchers Sean Heppner and Vic Domingo signed with the NorthPaws for the 2022 season.

The pair of first-year righties from the University of British Columbia Thunderbirds had initially signed to play in Kamloops during the 2021 season and have recommitted to the expansion team.

They are both products of the BC Premier Baseball League and have had their collegiate debuts delayed by a year as the Thunderbirds were unable to play in 2021. The attended the Blue Jays’ 2019 Tournament T12 showcase together and were dorm mates during their first year at university, so it’s only fitting they will make their West Coast League debuts together in Kamloops.

Domingo, from Vancouver, is the first player to suit up for the Thunderbirds after playing for the UBC Thunder youth program.

“He comes after you, he challenges you on the mound. He might be shorter in stature than some of the other guys, but he doesn’t lack anything from the confidence piece and the presence on the mound. He’s gritty, he’s not scared of anybody, and he’s got the stuff to back it up,” said Sammie Starr, assistant coach with both the NorthPaws and the Thunderbirds.

Domingo has also represented Canada on two occasions. He first donned the Maple Leaf at the Little League World Series when he was 11 years old, and he was named to the U18 Junior National Team in 2020 before that experience was cut short by the emerging pandemic.

Heppner was primarily an infielder during high school but developed to become the ace of the North Delta Blue Jays during his grade 12 season, leading his team to a Baseball BC provincial title and a berth at nationals.

He throws what he describes as a pretty standard mix of pitches – fastball, curveball and changeup.

“My approach is just going out there trying to get outs and trying to get the bat back in our hitters’ hands as quickly as possible,” Heppner said.

He is from Point Roberts, WA, a unique town located on the southernmost point of the Tsawwassen Peninsula, only accessible to the rest of its state by land through B.C.

“I’ve basically done everything in Canada my whole life with school, baseball, all sports and all my friends are in Canada too. It’s definitely one of the most unique places in North America because it’s basically Canada, but it’s not,” Heppner said.

The Thunderbirds, who play in the NAIA Cascade Collegiate Conference, will open the 2022 season schedule with a road trip through Arizona and California beginning February 4.