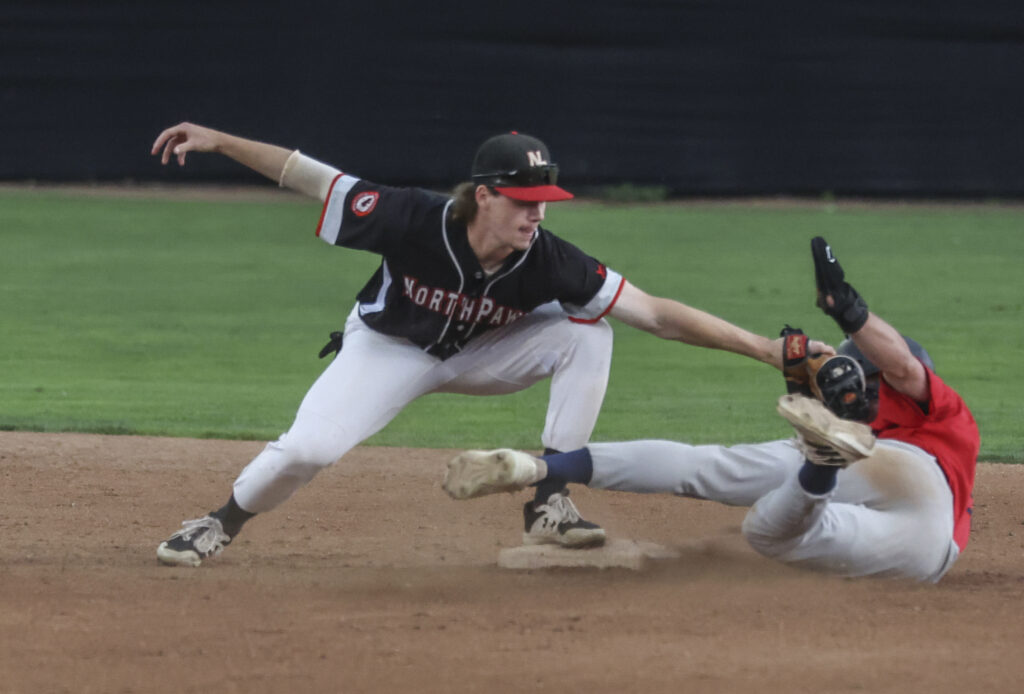 Mike Fitzsimmons applies the tag for the out. Photo: Allen Douglas

The Kamloops NorthPaws upended the Kelowna Falcons 5-4 Wednesday night on Dearborn Ford Field at Norbrock Stadium to continue their push for a post-season berth.

The Falcons opened the scoring in the top of the 1st inning for the second night in a row. The visitors loaded the bases with back to back two-out singles followed by a walk, then Luke Solis came home from third on a wild pitch to score the first run of the game.

The NorthPaws answered back in the bottom half of the inning. Ty Siffermann hit a lead-off single, advanced to second on an error by centre fielder Kam Edwards, stole third and then scored on an RBI single from Tommy Green. Three batters later, Angus Stayte sent a blooper into right-centre field to bring Robin Villeneuve home and take a 2-1 lead through the opening frame for the home side.

Angus! @angusstayte with the RBI single to take the lead!

Zack Beatty extended the NorthPaws lead in the 3rd inning with a solo shot to left field, his 9th of the season to tie him for the team lead in home runs.

Zack Beatty does it again! The solo shot makes it 3-1 NorthPaws in the 3rd.

That ties him with @chenier_felix for the team lead with 9 homers this season! pic.twitter.com/JPfYkdFTo3

The Falcons answered back in the top of the 4th. Hiroyuki Yamada hit an RBI double to score Nolan Klein, who had reached earlier on a walk. The Falcons then loaded the bases, but NorthPaws starter Colby Ring struck out Mike Montrezza to end the inning and escape the threat.

Villeneuve re-instated a two-run Kamloops lead with an RBI single in the bottom of the 4th to score Mike Fitzsimmons, who had reached earlier on a one-out double, to make it 4-2 NorthPaws.

The Falcons score in the top half, but Robin Villeneuve (@WCoyoteBaseball) with an RBI single to bring Mike Fitzsimmons home from 2nd base re-instates the two-run lead.

The Falcons tied the game at 4-4 in the 5th inning. Austin Coyle drew a walk with the bases loaded, then Sam Hasegawa hit a comebacker off reliever Connor Barton to score a run and tie the game.

Tyrelle Chadwick stepped up to the plate with one out and the bases loaded in the 7th inning, he hit a groundball to third baseman Nolan Klein who stepped on third base for the force out, but his throw home was wide allowing Green to score and put the NorthPaws ahead 5-4.

Ring struck out seven Falcons batters in the start, allowing four runs on four hits through 4.1 innings of work. Connor Barton and Carter Harbut combined for 3.2 scoreless innings in relief, setting up a chance for Kole Turner to close the game out. He took over to pitch a scoreless ninth inning to collect his first save of the season and secure the victory.

The NorthPaws and Falcons will wrap up the series, the final home game of the regular season, Thursday night at 6:35pm.